A shooting that injured multiple people has been reported outside of the Third Base Gate at Nationals Park, according to the team and DC Police.

WASHINGTON — Four people were shot Saturday outside Nationals Park located in the Navy Yard area of Washington D.C., according to the Washington Nationals in a statement after the game was impacted by the developing crime situation.

The shooting happened in the 1500 block of South Capitol Street, Southwest, said D.C.Police.

Two people were found injured from gunshot wounds outside of the stadium, while two other people walked into a hospital in the area following be struck by bullets, according to D.C. Police.

In videos from the ballpark on social media, fans can be seen running sporadically through the stadium’s concourse after gunshots were heard. Players can also be seen exiting the field of play and fans entered the field of play amid the commotion.

People leaving say it was chaotic and terrifying as they heard gunshots echo in the park. People told WUSA9 they were carrying children out, holding one another and hiding from what they thought was a possible shooting inside of the stadium.

The Washington Nationals were in the middle of a game with the San Diego Padres. The game has been postponed, according to MASN.

“A shooting has been reported outside of the Third Base Gate at Nationals Park.  Fans are encouraged to exit the ballpark via the CF and RF gates at this time. We’re working with law enforcement to provide more information as soon as it becomes available,” said the Washington Nationals on Twitter.

Federal and local law enforcement are investigating the shooting outside of Nationals Park.

As of now, no one that was in the stadium at the time of the shooting has been injured.

#Breaking: Most people have cleared @Nationals stadium after nearly 6 gunshots outside frightened fans and families inside @wusa9 pic.twitter.com/kfbMUfMXBo

The shooting comes only hours after Mayor Muriel Bowser and other D.C. and federal law enforcement officials held a news conference following a Friday night shooting in Southeast D.C.

That shooting claimed the life of a 6-year-old girl and injured five other people.

D.C. Mayor Muriel Bowser was at the White House last Monday, joining President Biden and local leaders from around the country who are scrambling to deal with a surge in murders in a number of cities.

The president said one key is stemming the flow of firearms used to commit violent crimes.

#Breaking: police and fire on scene of shooting on S.Capitol Street outside of @Nationals park @wusa9 @DCPoliceDept pic.twitter.com/2aqyryKDBe

The D.C. Police Union said this is the earliest the city has recorded 100 homicides since 2003. Over the last decade, the city has, on average, hit the grim mark by Oct. 25.

WUSA9 will continue to provide updates as more information comes into our newsroom. 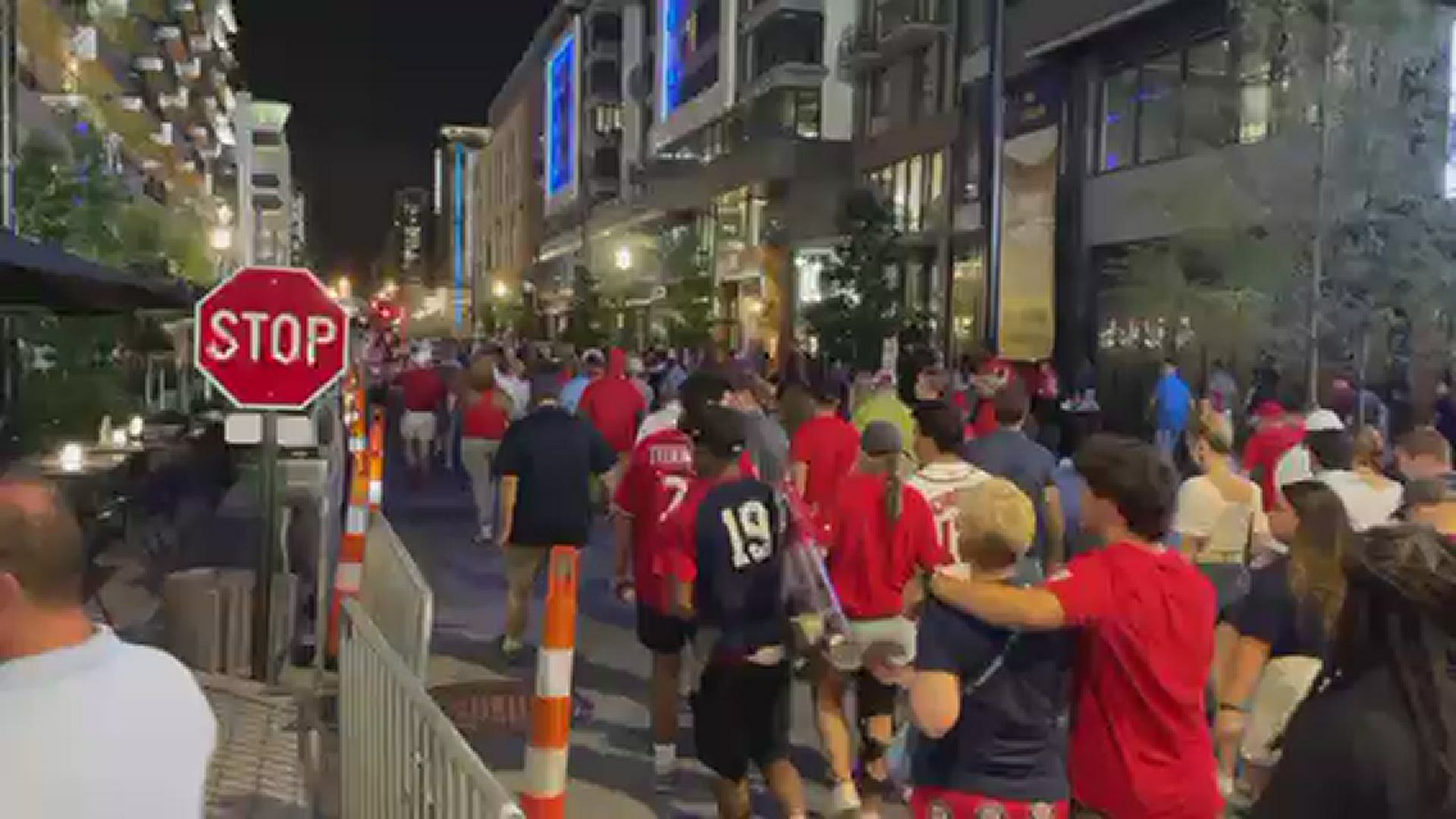 Shooting outside of Nats Park. Fans hit the ground, players clear the field. Security later announces activity was OUTSIDE of stadium. @DCPoliceDept on scene pic.twitter.com/TuwNwCrOUw