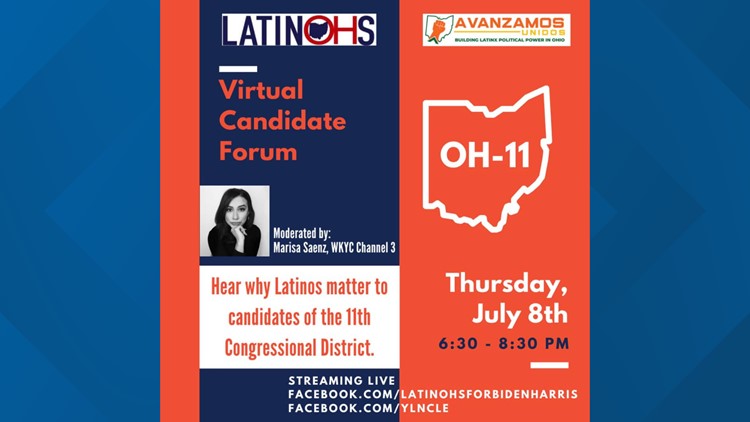 CLEVELAND — Editor’s note: The video in the player above is from a story published on July 7, 2021.

On Thursday night, 3News Reporter Marisa Saenz moderated a virtual forum for candidates in the race to replace Marcia Fudge as the representative for Ohio’s 11th congressional district. Fudge is now serving as U.S. Secretary of Housing and Urban Development in the Biden Administration.

The event, held in partnership with LatinOHs Northeast Ohio, Young Latinos United, and  Avanzamos Unidos, discussed the impact of the Latino vote in the upcoming election while also addressing issues that affect the Latino community in Northeast Ohio.

Beginning at 6:30 p.m., candidates were asked for their opinions on matters of importance to their prospective Latino constituents, as well as how they plan to address the issues if they were to win the election.

Five of the 15 candidates appearing on the special election ballot  took part in the virtual forum hosted by Saenz: Jeffrey Johnson, Shontel Brown, Rev. Pamela Pickney, Martin Alexander, and Nina Turner. Laverne Gore had committed to attending, but did not show up.

You can watch the forum again in the player below:


Early voting for the Special Primary Election to replace Secretary Fudge began on Wednesday and concludes on Tuesday, Aug. 3. So far, there are 13 Democratic candidates and two Republicans vying to replace Fudge. They are as follows:

Saenz, originally from Texas, joined the 3News family in March and says she couldn’t be happier to have this opportunity and give a voice to a community in Northeast Ohio that often goes overlooked.

“Dr. Evelyn Rivera with LatinOHs Northeast Ohio came to me after we worked on a story regarding the lack of bilingual resources throughout the COVID-19 pandemic. As a Latina woman in journalism, I am working to integrate myself into Cleveland’s Latino community, and am happy to ask tough questions on behalf of NE Ohio Latinos. I am honored to represent the Latino community in my first forum as a WKYC reporter”

The Special Primary for Ohio’s 11th Congressional District seat will take place on Tuesday, August 3. The General Election is scheduled for Nov. 2, 2021.

Editor’s note: The video in the player above is from a story published on April 28, 2021.