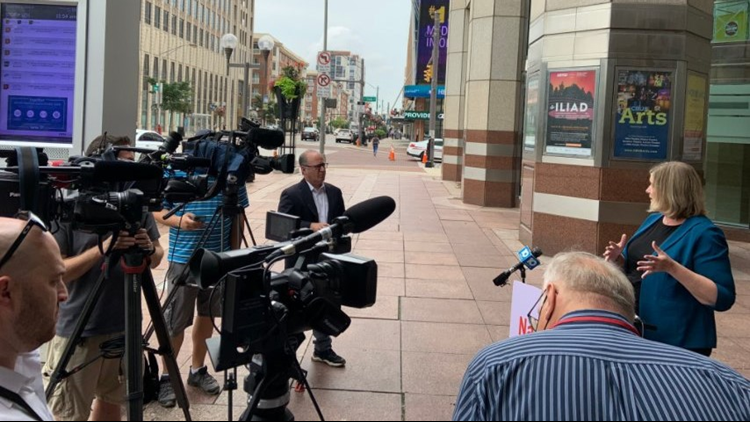 Whaley is a candidate for Ohio governor in 2022.

COLUMBUS, Ohio — Editor’s Note: The above video is from a previously published story

With the number of COVID-19 cases in Ohio rising, one of Gov. Mike DeWine’s possible opponents for reelection is calling on him to impose a mask mandate for the state’s schools.

Dayton Mayor Nan Whaley held a press conference in Columbus on Thursday to urge DeWine “to stop putting politics ahead of public health and demonstrate leadership by issuing a statewide mask requirement for K-12 schools.”

“We need to do everything we can to keep kids safe and our schools open. It’s time for him to show some courage and stand up for Ohio’s children,” Whaley stated. ‘When I talk to everyday voters, folks are still worried about this deadly disease. They’re worried about their kids’ safety and their education. They just want what’s best for their kids. They don’t give a damn about the politics of it. It is time for action.


During his briefing on Tuesday, DeWine acknowledged that such mandates on his end are no longer feasible. Earlier this year, Ohio lawmakers passed and overrode a veto on Senate Bill 22, which gives the state’s General Assembly the ability to be able to reject any of the governor’s or health department’s health orders.

“On Tuesday, Gov. DeWine said he didn’t think there was an appetite for more COVID-19 safety measures. But what he meant to say was that there was opposition from Republicans in the Statehouse,” Whaley responded.

DeWine pleaded with school districts to at least consider mask mandates for the next few weeks and reminded parents in the state that they can have their children wear masks in schools regardless of their district’s policies.

“The best way to protect them is to send them to school with masks,” DeWine said.

Just finished a press conference outside Gov. DeWine’s office. I’m calling on him to institute a mask mandate for our schools.

We need to do everything we can to keep kids safe and our schools open. It’s time for him to show some courage and stand up for Ohio’s children. pic.twitter.com/zKd9GpepQR