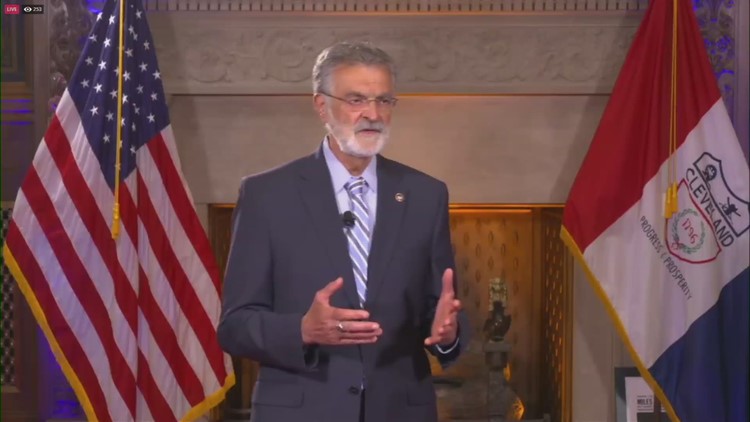 What’s next for Cleveland Mayor Frank Jackson? He will talk with 3News for a special live streaming interview at 10 a.m. today.

CLEVELAND — Less than 24 hours after announcing he is not seeking re-election this year, Cleveland Mayor Frank Jackson will sit down for a one-on-one conversation with 3News’ Russ Mitchell at 10 a.m. today. We will stream that interview live inside this story. You can also watch on the WKYC Facebook or YouTube pages.

“I’m honored to hold the office of mayor,” Mayor Jackson said during a tele-town hall Thursday afternoon. “I want to share with you that I’ve decided not to seek reelection for a fifth term. I’ve led the city of Cleveland as your mayor for almost 16 years. For 16 years, I’ve worked to stabilize this city, position this city and to ensure that all can participate in the prosperity and quality of life that we’ve created.”

He said it’s time to pass the baton.

“I’ve been considering it for some time now and I just made the decision that this is my time.”

His announcement comes as the mayoral race heats up with multiple candidates vying to win the role. The following have formally announced their mayoral bid:

Former congressman Dennis Kucinich, who also previously served as Cleveland’s mayor, has not yet announced his decision on running for the job. He did, however, tell 3News’ Mark Naymik that he’s seriously considering it. He also filed paperwork last December that allowed him to raise money for the Cleveland mayoral race.

So what’s next for Mayor Jackson? What factors went into his decision to not seek a fifth term? Those topics will be discussed and so much more during the 10 a.m. interview with 3News.

Here’s reaction to Mayor Jackson’s announcement that he’s not running again this year: