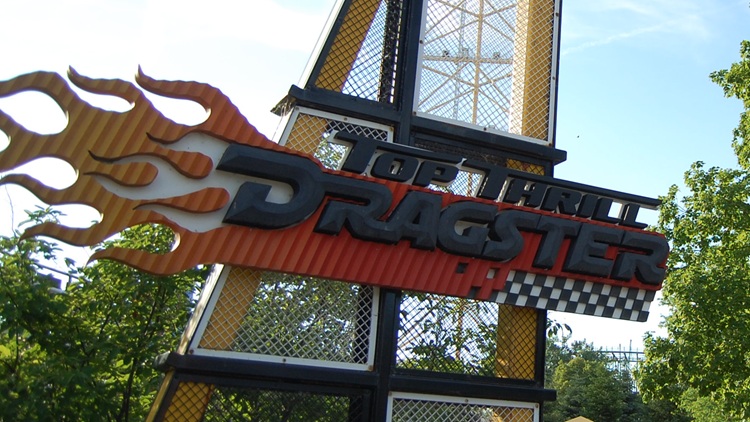 ‘The piece that struck the woman is an L-shaped bracket, approximately the size of an adult male’s hand.’

SANDUSKY, Ohio — We’re learning more about the accident at Cedar Point that sent a Michigan woman to the hospital after she was struck in the back of the head by a small metal object, which came off of a Top Thrill Dragster roller coaster train while she waited in line.

The situation is currently under investigation by the Ohio Department of Agriculture, which inspects all amusement rides statewide. David Miran, Chief of the Amusement Rides Safety Division for ODA, offered some new details during a press conference Monday afternoon.

If you scroll through the text below, you’ll find a summary of ODA’s investigation from Miran followed by a lengthy question and answer session that addresses many questions about the incident.

ODA takes very seriously the safety of all amusement rides in the state and we are conducting a thorough investigation of the ride. As you know, ODA was called to Cedar Point after a piece of the ride came off and hit a woman in the back of the head. We are terribly sorry for the woman and her family who endured this tragic event. We have no update on her condition, but we did speak with the family today to update them on the status of our investigation. The day of the event, the ride inspector verbally issued a stop operation order on the ride and placed a lock on it. ODA inspected the track and all trains on the ride. The piece that struck the woman is an L-shaped bracket, approximately the size of an adult male’s hand. It’s known as a flag plate. It communicates to the ride’s operating system that the particular train is through a portion of the track. In ODA’s inspection, it discovered that the green train was missing the plate on the left side of the train body. Half of the bolts, which secured the plate to the train body, were still in place. The track on which the train returns near the finish line – what is called the brake bracket area – shows signs of impact and deformation. Several horizontal track beams show signs of impact within approximately 25 feet of the damaged brake bracket. ODA is investigating the cause of how and when the plate disconnected from the ride and the damage that occurred to the track. The train has been sent to a laboratory to examine the bolts, which remain in the train body and ODA is awaiting a report from that testing laboratory.

We streamed the entire ODA press conference, which you can watch in full below:

Question: Why was this issue missed in ODA’s initial inspection?

Question: Can the state order the removal of a ride?

Miran: I’m not quite sure if I understand the question. If the question is the physical removal of the ride – as in the physical dismantling of the ride – we would not have the authority to issue the removal in that sense. However, we are required to license and inspect every amusement ride in the state of Ohio, so should there be a ride, which does not meet our regulations, we would simply not permit that ride.

Question: Approximately how fast was the train traveling at the time of the incident and how far away was the woman from the track?

Miran: I don’t have specific miles per hour data on that front, but it is towards the bottom of the track. It is likely at the train’s max velocity at that point, but I don’t have specific miles per hour on that part. I do not have a specific distance as the investigation is still ongoing, we’re not exactly sure where the piece dislodged officially. So I’m not able to provide exact distances on where the woman was approximately from the point of disconnect.

RELATED: 3News Investigates pushes for the release of public records in the Cedar Point investigation

Question: When was the last full inspection of the ride leading up to the incident?

Miran: I can tell you that ODA’s last inspection occurred on May 14 of 2021. I do know that Cedar Point does pre-opening inspections on a daily basis.

Question: This isn’t the first time this ride has had issues. Did any of the former problems have to do with this one?

Question: Is this a concern only for the Top Thrill Dragster or is there any concern to similar rides at Cedar Point or other amusement parks nationwide?

Question: Was the victim’s family able to provide any information that helped with the investigation?

Question: How high up was the bracket from where it fell?

Miran: I don’t know that information at this time.

Question: Can you explain more about the L-shaped piece and what its purpose is?

Question: Is it time for ODA to insist that the park reports all injuries no matter the threshold so customers can be well informed about breakdowns and injuries related to all rides they are about to go on?

Question: Was there any danger to the riders on the train?

Miran: We have not received any reports of injuries to anybody on the train.

Question: Was the bracket recovered? Where is it now? Can you speculate what might have caused it to come off?

Miran: I’d rather not speculate at this time simply because the investigation is ongoing. Cedar Point is currently in possession of that L bracket. We have numerous photographs and examined the piece ourselves here at ODA, but I won’t speculate on the ongoing investigation.

Question: There is video of a nurse talking about putting a collar on the injured woman. Do you know whether there’s any investigation into the way paramedics handled the moments following the injury?

Miran: So, ODA performs a ride investigation to figure out what happened and may have malfunctioned – if at all – with the ride itself. We don’t investigate the emergency response or anything with regards to the people involved.

Question: How often do injuries from flying debris happen with respect to amusement park rides at Cedar Point and / or nationally, locally in Ohio?

Miran: We don’t track that information. Accidents are what is reported to the Department of Agriculture, so we don’t have any data on that front.

Question: What pieces of evidence are you using as part of your investigation? Is there video? Are there witness statements?

Miran: So as a part of any investigation, the Department of Agriculture collects a good bit of information including those inspection documents, pre-opening inspections, witness statements should there be any and just various pieces of documentation that are vital to our investigation. What will be included today [in a release of new information] is the accident report that has been submitted to Cedar Point to ODA. As for those other documents, at this point in time because the investigation is still ongoing, we are not releasing those documents at this time.

Put the pedal to the metal because no speeding tickets are cited to Top Thrill Dragster. Three point eight….that’s 3.8… seconds. That is all it takes to go from a complete standstill to 120 miles per hour. You’ve never experienced speed like this. Even with a true drag strip “Christmas tree” light counting down the launch, you’ll never be ready for the pure adrenaline rush packed into a 17 second race. Riders are launched in the blink of an eye before sprinting straight up at a 90-degree incline. If you dare to open your eyes at the top you will see spectacular views only viewed by the bravest 420 feet in the air. But look quick, before you know it, you’re hurtling back to the ground in a 270- degree twist before crossing the finish line. We aren’t kidding when we say that this high-octane sprint to the checkered flag knows a thing or twenty about horsepower.