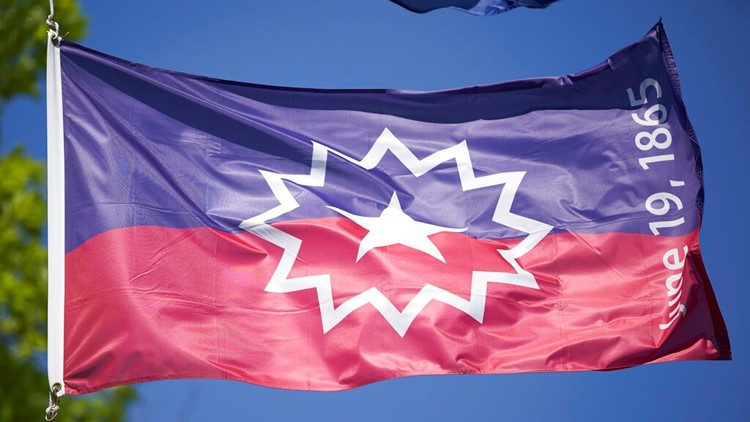 The Juneteenth flag commemorates the day that slavery ended in the US. But do you know the meaning behind the symbols included in the flag?

On Thursday, June 17, President Joe Biden signed a bill passed by Congress to set aside Juneteenth, or June 19th, as a federal holiday.

The Senate approved it unanimously, and only 14 House Republicans opposed the measure.

The celebration started with the freed slaves of Galveston, Texas. They got the news the war was over and they were free in 1865 on June 19, a date that was melded into the word “Juneteenth.”

The Juneteenth flag commemorates the day that slavery ended in the US. But do you know the meaning behind the symbols included in the flag?

Here’s what they stand for:

The red white and blue banner with a bursting star in the middle is full of symbols according to the flag’s creator, activist Ben Haith, founder of the National Juneteenth Celebration Foundation.

Let’s start with the colors – of course representing the American flag, and a reminder that slaves and their descendants were – and are – Americans.

This curve across the width of the flag represents a new horizon: the opportunities and promise that lay ahead for black Americans after freedom.

Stars on the Juneteenth flag

The white star in the center of the flag has a dual meaning – representing Texas, the Lone Star State. It was in Galveston in 1865 where Union soldiers informed the country’s last remaining slaves that the Civil War was over – and they were free.

Haith said the star also goes beyond Texas, representing the freedom of African Americans in all 50 states.

The bursting outline around that star is inspired by a nova, or “new star” according to astronomy. This represents a new beginning for all African Americans.

Material from the Associated Press contributed to this report.