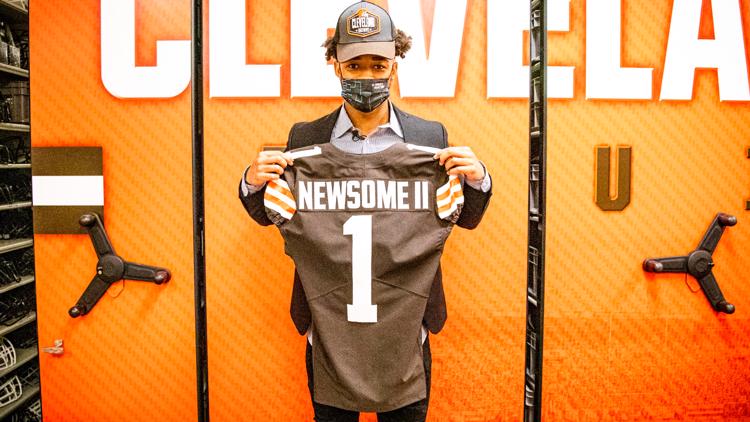 CLEVELAND — One week after being selected by the Cleveland Browns in the first round of the 2021 NFL Draft, Greg Newsome II has unveiled which jersey number he’ll be wearing with his new team.

Taking to his Instagram account on Thursday night, Newsome posted a photoshopped picture of himself wearing a No. 20 Browns jersey along with the caption “G20.” The post from Newsome, who wore No. 29 and most recently, No. 2, during his college career at Northwestern, seems to indicate that he’ll be wearing No. 20 in Cleveland, which was made available when cornerback Tavierre Thomas signed with the Houston Texans in free agency earlier this offseason.


Selected with the No. 26 overall pick of last week’s draft, the 20-year-old Newsome arrives in Cleveland looking to help solidify a Browns secondary that struggled throughout the 2020 season. As a junior with the Wildcats, the first-team All-Big Ten selection allowed just 12 catches on 34 targets for 93 yards, totaling seven pass defenses and one interception during the Big Ten’s shortened 2020 campaign.

“I take pride in that a lot,” Newsome said of his college success. “In our secondary, we do not like guys catching the football. That is something that we do not like at all. I feel disrespected when a quarterback comes at me multiple times in a game. That is how I feel — I feel disrespected. I feel like teams should not try me. That is something that I definitely take pride in. I do not like guys catching the football. I feel like if I am doing my job stopping guys on the edge, then our team will have a great chance of winning.”