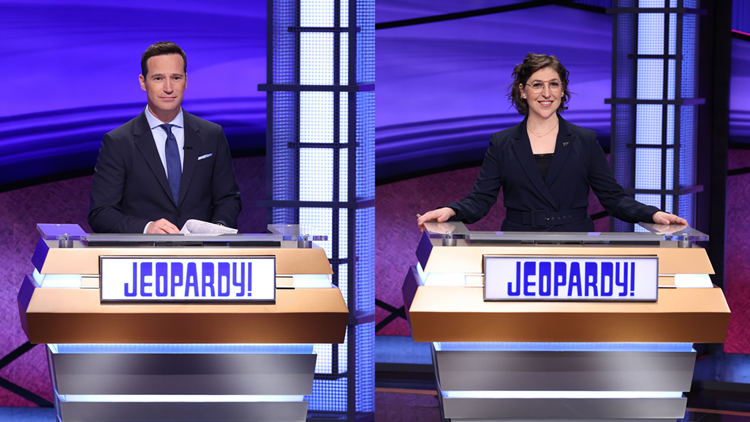 Eight months after the death of beloved “Jeopardy!” host Alex Trebek, the longtime game show has picked his successor.

WASHINGTON — “Jeopardy!” has ended its search for Alex Trebek’s successor – and the show couldn’t settle on just one person.

On Wednesday, Sony Pictures Television announced that Mike Richards will take over as the everyday host of the iconic trivia game show, while actress Mayim Bialik will head primetime and spin-off programming.

Richards is the executive producer for both “Jeopardy!” and “Wheel of Fortune,” and will maintain that roll in addition to the new hosting gig. Bialik has starred in shows like ‘Big Bang Theory’ and currently FOX’s ‘Call Me Kat,’ but she also has a Ph.D. in Neuroscience.

Bialik will host the upcoming new “Jeopardy!” college spin-off, “Jeopardy! National College Championship,” which is set to begin airing on ABC next year.

“We are thrilled to begin the next chapter of America’s Favorite Quiz show with Mike hosting our daily show and Mayim hosting new versions of ‘Jeopardy,'” Sony Pictures’ Ravi Ahuja said in a statement. “We took this decision incredibly seriously.”

Former “Jeopardy!” host Alex Trebek died in November 2020, after a public battle with pancreatic cancer. Trebek hosted the show for 37 of its 56 years. In the search for his replacement, the show paraded a slew of celebrity guest hosts, including Richards, Bialik, “Reading Rainbow” host LeVar Burton, and even Green Bay Packers quarterback Aaron Rodgers. Each hosted for a week as a tryout for the full-time gig.

The decision seems to have been made for a while now. Bialik tweeted after Deadline reported the news, saying, “Been waiting a long time to tell you all. Really really honored and astounded and excited for this – it’s beyond anything I ever imagined could happen.”

IT’S TRUE!!! Been waiting a long time to tell you all. Really really honored and astounded and excited for this – it’s beyond anything I ever imagined could happen. https://t.co/MZpXV7a9xf @Jeopardy

Sony Pictures Television has not announced when episodes featuring Richards or Bialik will begin to air.