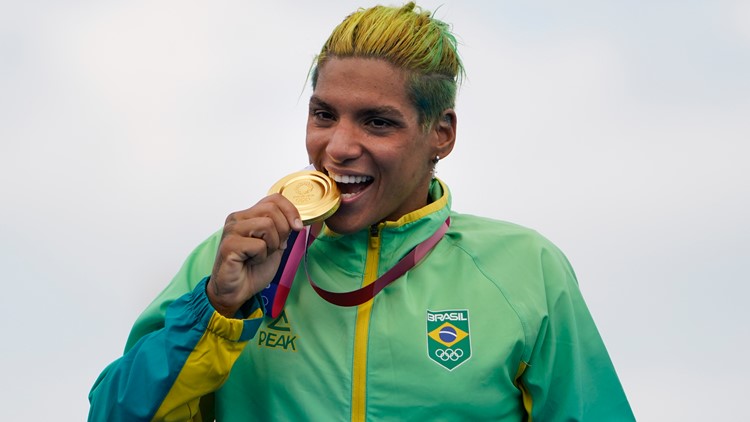 It’s a tradition for Olympic winners to bite their medals, but there are two different stories behind where the practice comes from.

One of the typical yet iconic images you see at the Olympic games is the winners standing on the podium, biting their newly-won neckwear. But how did this come about?

We’ve already seen this happen several times at the Tokyo Olympics and the official Twitter account for the Summer Games even recently reminded people the medals aren’t edible.

“We just want to officially confirm that the #Tokyo2020 medals are not edible,” the Tokyo 2020 account tweeted. “Our [Olympic] medals are made from material recycled from electronic devices donated by the Japanese public.  So, you don’t have to bite them… but we know you still will.”

The modern-day answer is one that may not seem all that interesting. Ever watch an awards show red carpet when the photographers are yelling at the well-dressed stars to look their way and smile, pose or whatever else? According to multiple accounts from Olympians, the same thing happens at the games. Photographers hound athletes to “bite” their medals.

“It’s become an obsession with the photographers,” David Wallechinsky, president of the International Society of Olympic Historians, told CNN in 2012. “I think they look at it as an iconic shot, as something that you can probably sell. I don’t think it’s something the athletes would probably do on their own.”

There’s also an older answer to the question. Money handlers more than a century ago would bite down on coins to ensure they weren’t counterfeit. Real gold is softer than human teeth and, therefore, would be left with a mark if bitten, according to CNN.

For the Tokyo games, the medals are made from recycled, small electronics. Nearly 79,000 tons were collected during the “Tokyo 2020 Medal Project,” including more than 6.2 million tons of cell phones.