Home » Why do people say we need voting rights acts? 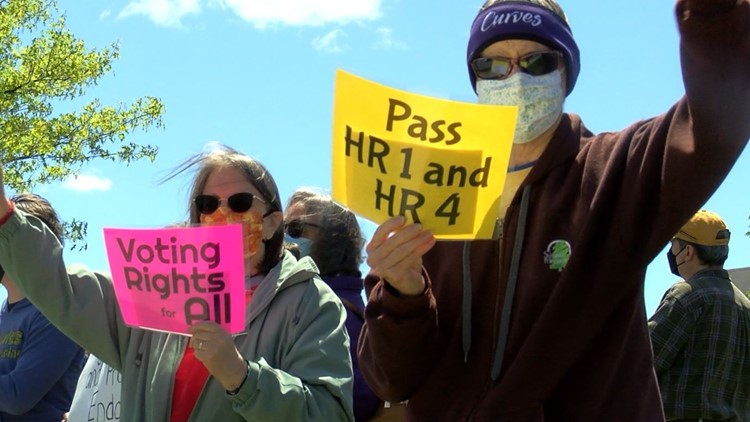 The effort was part of a nationwide effort to promote voting rights. Some local state representatives also came out against H.B. 294, which overhauls voting in Ohio.

Supporters drove to Sen. Rob Portman’s office to urge him to vote yes on the two bills, which proponents argue will protect the right to vote.

This comes as Ohio joined recent states in proposing its own voting overhaul bill.

People chanted “hands off our vote” and “protect the vote” near Sen. Portman’s office.

“We need a basic standard across the board and some consistency across the states,” said Marja Lasek-Martin.

House Resolution 4, or the John Lewis Voting Rights Act, would restore a key part of the Voting Rights Act of 1965, struck down in the 2013 Supreme Court case Shelby County v. Holder. It would require certain states to sign off on any election law changes with the federal government.

Ohio state representative Lisa Sobecki stressed it was the federal government that helped assure the right to vote for African-Americans and women.

“There’s clear examples of when our federal government has had to step in with the states to allow people the opportunity to vote,” said Sobecki.

House Resolution 1, or the “For the People Act”, would do a little more. It would expand voting rights by allowing for same-day voter registration, require states to offer early voting, make Election Day a federal holiday, change campaign finance laws to reduce the influence of money in elections and make the redrawing of congressional districts a non-partisan process.

These calls come just as Ohio republicans introduced a voting overhaul bill in House Bill 294. But some state representatives like Paula Hicks-Hudson believe that bill will do harm.

RELATED: Board of Election officials weigh in on proposed Ohio election changes

“It really isn’t about modernizing. It’s about voter suppression,” she said.

State representatives Hicks Hudson and Sobecki say the new proposal hurts the very ways more people voted in the 2020 election. It limits counties to just one ballot dropbox location and allows them to be used only for the 10 days before the election, compared to 30 in 2020.

“Why can’t we put a ballot box at the library,” Sobecki said. “People go to the library. It’s secure.”

The bill also eliminates early voting on the Monday before the election and reduces the time to request an absentee or mail-in vote. Local UAW 14 president Tony Totty says  this gives working-class people less time to vote.

“I’ve been saying time is money,” he said. “This is a new poll tax that they’re imposing on my members and on the citizens of Toledo.”

That bill will be reviewed in the House and Senate before coming to a vote.

WTOL 11 reached out to Sen. Rob Portman’s office for comment on the bills but has not heard back.