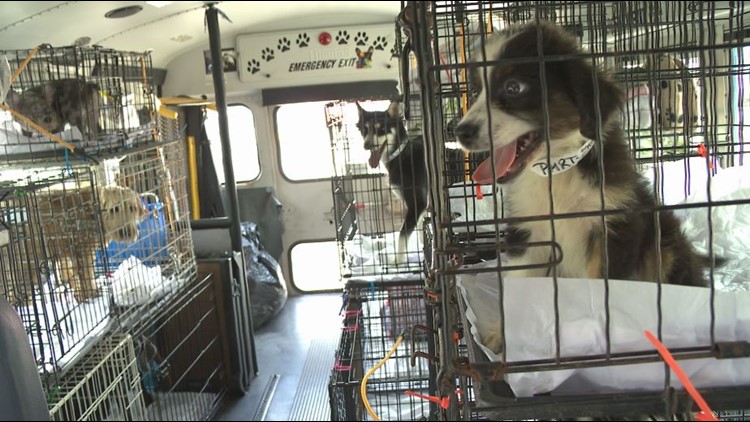 “I hate puppy mills, but it’s a dance with the devil.” Activist Jamie Runevitch says high volume dog breeders willingly give her dogs “they have no more use for.”

She’s up before the sun, driving to Sugarcreek in Holmes County.

“We started around 6 a.m. this morning,” said Jamie Runevitch, vice president of the Puppy Mill Rescue Team. “A lot of people see this area as good food, arts and crafts but there is an extraordinary amount of puppy mills.”

Runevitch is an animal right activist and this is the first stop on her rescue mission. She wants to make it clear, this is not a raid.

“This Yorkie is five, I believe, just not in good condition,” said Runevitch.

The breeders willingly gave Runevitch this Yorkie because they had no more use for her.

Jamie’s next stop is Millersburg. And it’s the same story with a 2-year-old husky.

“Now that she’s basically worthless to them because people don’t want her puppies anymore, they surrendered her,” Runevitch said.

So why isn’t Runevitch reporting these breeders to the state?

In most of these cases, she doesn’t know which dogs came from which breeders because she picks them up at a neutral location – like a veterinarian’s office.

And she said most breeders are not doing anything illegal.

“A lot of great laws have passed in Ohio lately, but they’re not enforced. The big thing that happened is, they switched to ‘teachable moments.’ So let’s say I go to a puppy mill, I see a Yorkie just had a C-section, she’s bleeding, the puppies are malnourished, everything is a mess.  All they’re [the state inspectors] required to do is say ‘Hey don’t do that, do better next time’ and leave,” Runevitch said.

The Ohio Department of Agriculture disagrees, describing “teachable moments” to 3News Investigates very differently, telling us, “ODA strives to get licensees to bring themselves into compliance.  Depending on the severity of the violation, the licensee is given time to remedy the issue, then a re-inspection is performed to determine if compliance was achieved.”

ODA went on to say that it documents all violations they find, adding, “During the course of an inspection, our inspectors take the time to educate people on our laws and rules. There are always consequences to violations that are found – the licensee is written up. This documentation allows us to put a licensee on a deadline to come into compliance. If the deadline is not met, ODA takes the appropriate enforcement action at that time. The time a licensee is given to come into compliance is dependent upon how serious the violation is. If a violation has a significant animal health impact, the timeline is much shorter than a record keeping violation, for example. Additionally, if one of our inspectors finds evidence of abuse or neglect as defined in ORC 959, we would immediately refer that over to the local authority that has the jurisdiction to enforce ORC 959 for their consideration.”

3News Investigates can confirm that the state has not shut down any operations since 2016, when it revoked a license from a high volume dog breeder.

The ODA currently has five inspectors which oversee 472 breeders.

“I want to save dogs. I hate puppy mills, but it’s a dance with the devil,” Runevitch said.

“If I don’t play nice with the people who are running these operations, I won’t be able to save puppies with disabilities or 2-year-old dogs who deserve a chance to live,” Runevitch said.

So, what’s next for the dogs involved in this rescue mission?

They got on the rescue transport bus, and are heading to humane societies and shelters in Ohio, Pennsylvania and New York, where they will continue to get medical treatment – and hopefully find their forever homes.

Social media influencers sought to ease COVID vaccine fears
When is the Senate voting on the infrastructure bill?
Comment