Home » Widespread outages cripple much of the internet, most coming back online 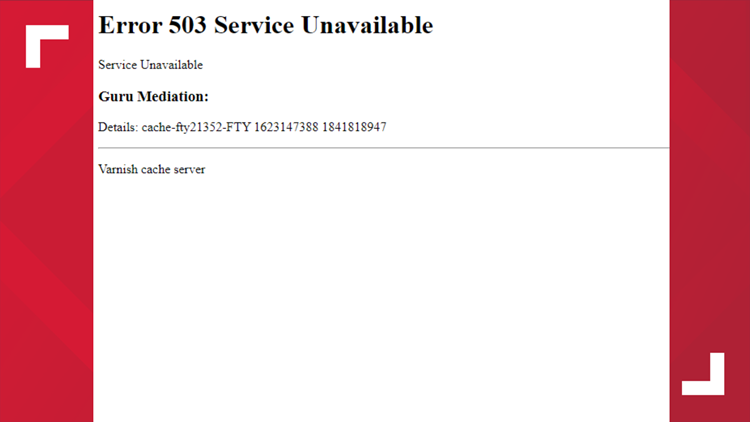 For about an 90 minutes, a big slice of the internet was completely unavailable, including dozens of high-traffic sites.

NEW ORLEANS — A widespread problem with one of the cloud services providers that hold up much of the internet crippled a major chunk of the world’s most popular websites for over an hour Tuesday morning, disrupting everything from news outlets to government sites.

Everything from Reddit to Twitch to the U.K. government’s home page all saw their websites go offline. In their place, a 503 error message was displayed saying service was unavailable.

Cloud service provider Fastly, which offers back-end services such as video streaming and digital security, said that an error in their infrastructure caused widespread outages, disrupting service to many of their clients.

At 6:12 a.m. CDT, the company tweeted that they had identified the issue and resolved it, saying that their global network was coming back online.

We identified a service configuration that triggered disruptions across our POPs globally and have disabled that configuration. Our global network is coming back online. Continued status is available at https://t.co/RIQWX0LWwl

An outage at Fastly is bad news because cloud service providers power a giant chunk of the internet. If one of those sites is down, there’s a good chance at least one of the sites you regularly use is having issues.

According to outage tracking wesbite downdetector.com, the major outages began around 4:30 a.m. CDT. Just over an hour and a half later, Fastly reported that their network was coming online, and users began seeing the websites they had been trying to reach.

Stay with Eyewitness News for more on this breaking story.

► Get breaking news from your neighborhood delivered directly to you by downloading the new FREE WWL-TV News app now in the IOS App Store or Google Play.