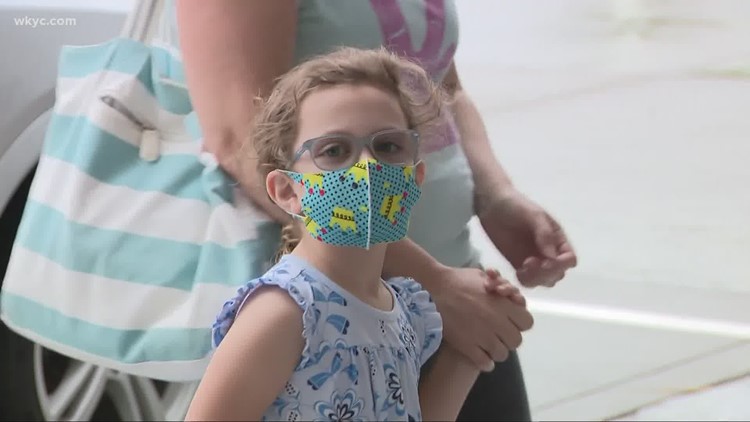 The 14-year-old from Stark County is speaking at a school board meeting Wednesday night.

“That’s a huge concern about someone else deciding the health and safety of our children,” one parent said at the board of education meeting.

“Let’s show our kids the BBH code of conduct through the safety of simply wearing a mask,” said another parent at the meeting.

Districts across Northeast Ohio are releasing varying plans on mask policies. Many are requiring them indoors, while others “recommend” them, but are not issuing mandates.

That’s something 14-year-old Finn Wilburn, a vaccinated freshman at Hoover High in North Canton, doesn’t agree with. So he’s speaking up Wednesday night at a board meeting. Wilburn spoke with 3News Wednesday afternoon ahead of that meeting.

In Bay Village, parents are divided over the district’s plan to implement masks for the first two weeks, before re-evaluating based on the county’s COVID-19 case data. With planned protests for parents on either side, the district said in its full statement:

“On Monday, August 9, 2021, Bay Village Schools shared with its families that it was initiating a mask requirement for the first two weeks of school, August 16-27. This Superintendent Update is linked here. This was a pivot from the initial plan that was shared on Friday, July 30, linked here. The district has always shared a disclaimer with its families that plans may change often this year due to the Delta variant, and that our families’ flexibility is very much appreciated.

Bay Village Schools is taking a unique approach to masking, initiating a “two-week chunk” masking plan. After the first two weeks of school, the district will review its own data, as well as data from the Cuyahoga County Board of Health, particularly numbers in the city of Bay Village, to determine if masks will be required for the next two weeks. And so on. Families will be alerted via text and email if a building is masking the next two weeks. (Since we don’t have data yet for the district, we are asking everyone to mask up for the first two weeks so we can gather this data.)

We used this model last year when determining if we would be In-building or in eLearning mode, and it worked out well. It allowed for our district to pivot in response to changing data. The end result was that Bay Village Schools was In-building for 80% of the school year, more than any other district in Cuyahoga County.

We understand that some of our families are upset with the change. We appreciate this is a significant ask. However, after participating in a Cuyahoga County Board of Health call last Friday, August 6, Interim Superintendent Shryock and the Board of Education felt this was the best proactive plan for the district.

Regarding any parent rallies opposed to the new masking policy, Bay Village City School District Interim Superintendent Char Shryock said she appreciates that parents were hoping masks would not be part of the school supply kit this year.

Our number one reason for making this decision is for the 2,400 students in our daily care,” said Shryocck. “With the Delta Variant and its increased spread, we are choosing to be proactive since it is more manageable to keep our curve flat than to have to work to flatten our curve. We may not all be in agreement about masking, but the common denominator is we all want what is best for our children; we all want to keep our students in our buildings learning with our teachers.”

But at the center of the debate are the kids whose parents, despite their views, are trying to do what’s best for them.

“We just want the choice, you know, to let our kids choose and let ourselves choose for our smaller ones …whether they want to or not,” Bay Village parent, Molly Kilbane said.