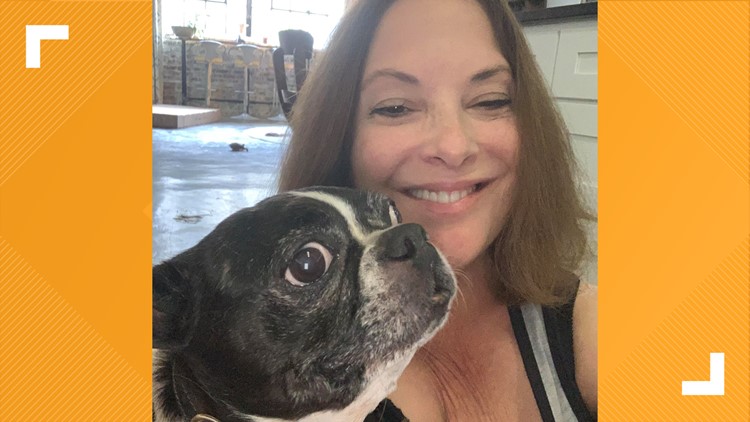 While making a legal cross at an intersection, Kara Welstead and her dog were hit by a car. She survived. Her dog did not.

ATLANTA — A woman has a simple message for drivers after she and her dog were hit by a car while making a legal walk through a crosswalk on Monday. Make room, pay attention and watch out for pedestrians — those are the words Kara Welstead wants people across the metro to execute on.

Taking a glance around Welstead’s downtown loft, and you can capture all the little moments she’s shared in her 13 years in Georgia.

Among them, numerous pictures of her two dogs, Chloe and Jethroe.

“As you can see, I never really cared for her much, Welstead said with a sarcastic laugh. “By all these pictures I have around.”

From the two pups posing on the couch to them kissing and playfighting, Welstead’s has varying snapshots of the two; Including one very interesting photo.

“They filmed The Accountant in this building and Ben Affleck was here. So, I figured it was better to get a picture of her with him. So, there’s Chloe with her friend Ben Affleck,” Welstead said proudly.

Chloe may have made a cameo appearance in Ben Affleck’s world, but she meant the world to Kara.

A few days earlier, on August 16th, while on a walk, Welstead’s world spun in a different direction.

“I was told that she didn’t see me or know I was there until I was screaming and by that time I was already under the car,” she said.

Near the intersection of Ivan Allen Jr. BLVD and Luckie St., Welstead made a legal cross to the other side. However, a woman turning right didn’t see Kara had the right of way.

“When she hit me, she pushed me back a few feet, about four to six feet from the crosswalk.”

After seeing surveillance video, Welstead said a white car hit her, and then stopped, while a police car was also stopped at the red light. It’s believed the driver, making a right turn, didn’t look left in enough time to see Welstead walk across.

“Luckily the cop car was right there.”

That police vehicle held a guardian inside.

EMT waited to make sure Welstead would survive before telling her, Chloe did not.

“I mean, this, it killed my dog, it could have easily killed me,” she continued to explain.

Welstead’s injuries include scabbed elbows, a broken vertebra in her spine, and a bleed on her brain.

If you believe all dogs go to heaven, then it’s not hard to imagine Welstead’s trying her best to forgive the driver for Chloe’s early departure.

“I’d like to think I’m able to forgive her. I know it was an accident and I would feel horrible if I knew I killed someone’s pet. So, I can only imagine that burden. I have friends praying for the driver, me, I’m not quite there yet, but I will get there.”

Welstead made the space in her world for two furry friends and she hopes the world remembers to make room for everyone else.

“You’re driving a weapon. I’m seen as an inconvenience because I’m crossing the street. Just, people are in too much of a hurry to get someplace that’s not really that important,” she stated.

The driver cooperated with the police and was given a citation. While Welstead works on that forgiveness, she wants people to remember in Georgia, it’s illegal to try to squeeze by, drive around or cut off a pedestrian in a crosswalk, even if there’s enough room.

Welstead’s best friend started a GoFundMe to help with medical bills and help her while she’s out of work recovering.