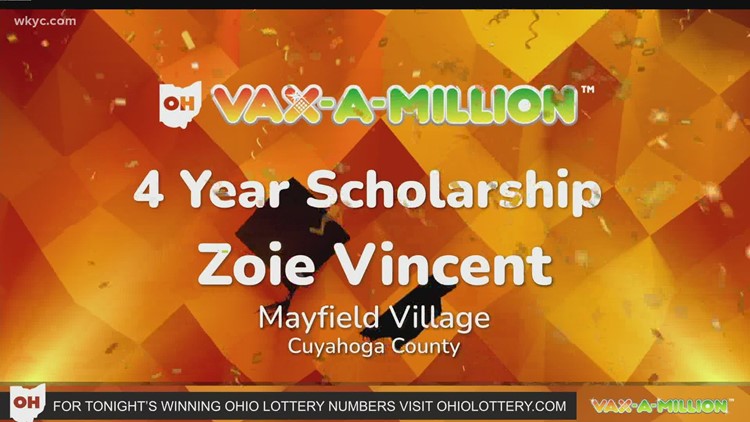 Zoie Vincent of Cuyahoga County was revealed as the second winner of the ‘Vax-a-Million’ lottery during the Wednesday night announcement.

MAYFIELD, Ohio — On Wednesday, the Ohio Department of Health and the Ohio Lottery Commission announced the second round of winners in Ohio’s ‘Vax-a-Million’ lottery for anyone who has received at least one dose of a COVID-19 vaccine.

Along with Johnathan Carlyle, the winner of the $1 million prize, Zoie Vincent of Mayfield Village was announced as having been pulled as the winner of the ‘Vax-a-Million’ scholarship — a prize that includes four years of tuition, books, room and board fully paid at any Ohio public university or college.

“Congratulations to our very own, Zoie Vincent on winning a 4 year scholarship through the Ohio vax-a-million. So awesome!!! #WildcatPride,” Legan wrote in a tweet.

Congratulations to our very own, Zoie Vincent on winning a 4 year scholarship through the Ohio vax-a-million. So awesome!!! #WildcatPride

Vincent was among more than 132,000 Ohioans aged 12 to 17 who entered the drawing to win the full-ride scholarship, according to the Ohio Department of Health.

Ohio has currently begun the vaccination process for more than 5 million residents, and more than 3.2 million Ohioans were entered into the ‘Vax-a-Million’ $1 million lottery for this week.

“I am pleased that leading into the holiday weekend, data continued to show that our Ohio Vax-a-Million promotion continued to increase COVID-19 vaccinations compared to the period before the promotion announcement,” said Ohio Governor Mike DeWine in a recent statement. “The vaccine remains our most powerful tool to fight the virus and for Ohioans to protect themselves and others. I encourage anyone considering getting the vaccine to not delay and take advantage of both vaccination opportunities and the Ohio Vax-a-Million promotion.”

RELATED: Ohio lifts COVID health orders: What the changes mean for you