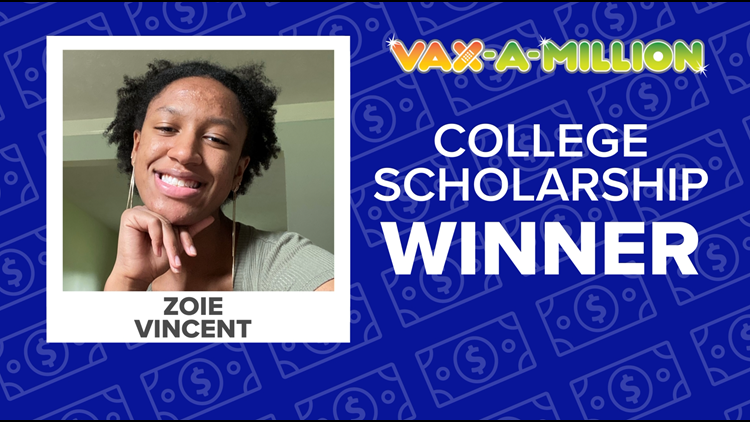 3News spoke with Zoie shortly after her win was announced Wednesday night.

CLEVELAND — On Wednesday at 7:29 p.m., the second winners of Ohio’s “Vax-a-Million” lottery were announced, and the lucky recipient of the full-ride scholarship turned out to be none other than Mayfield resident, Zoie Vincent.

Zoie, a junior at Mayfield High School, became the second Ohioan in the 12 to 17 age group to win a four-year scholarship to any public university or college in Ohio. The prize also covers school-related expenses such as books, room and board.

“I was just kind of really baffled by it, ” Zoie said, describing the moment she found out that she had won. “It was so surprising.”

In terms of what the high schooler would like to do with her prize, Zoie has her sights set on some big-name schools in the Buckeye State.

“I think I have my eye mainly on Ohio State and maybe Case Western, but I think I could do a lot more research into other Ohio schools now,” Zoie told 3News.

Regardless of where she goes, she knows what she would like to do.

“I’m pretty set on being a pediatrician when I’m older,” Zoie said. “I definitely want to go into medicine and biology, that kind of science.”

As a future medical professional, Zoie says she encourages everyone who is hesitating about getting the COVID-19 vaccine to pull the trigger, saying that it’s a good way to do your part and protect your community.

“It was sort of just like a way for me to help, what I feel like, my community, and just do my part in like, helping everybody’s health and creating herd immunity so that we can just get over the pandemic,” Zoie said, describing why she decided to get her vaccine.

Zoie isn’t alone, though. In the 12 to 17 age group, more than 132,000 Ohioans were entered into this week’s “Vax-a-Million” drawing, according to the Ohio Department of Health. And while she says she is still getting over the shock of it all, she says she could not be more thankful to have won this incredible prize.

“It was just a lot to take in at first, but I am so grateful for it.”

You can watch the full interview announcement of the “Vax-a-Million” announcement from Wednesday night in the player below:

Is Donald Trump back on Facebook? No, company says
Ohio sees decrease in COVID vaccinations despite “Vax-a-Million”
Comment